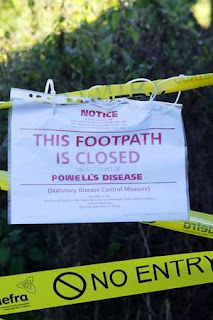 'The Life of Brian' contains a scene where a man is being stoned to death for blasphemy, after commenting that the fish he was eating was 'good enough for Jehovah'. The modern equivalent for Tory politicians is mentioning Enoch Powell's name without burying it in a heap of condemnation.

And so it comes as no surprise that the Tory candidate who dared mention that man has chosen his right to free speech above his political ambitions and resigned. Indeed the deadly phrase 'Enoch was right' is treated in much the same way as an outbreak of foot and mouth.

At the time of the last laboratory escape I decided to expose myself to the infamous 'rivers of blood' speech, to see what all the fuss was about. The speech was prompted by the Race Relations Act that the Wilson government was pushing through, which Powell saw as undermining the principle of equality before the law, but he focuses on the issue of immigration, or rather the volume of immigration, which he saw would dramatically change the country.

Now of course, those that detest the man are forever telling us that immigration has indeed transformed the nation. The difference between their view and Enoch's is in whether it is a good or a necessary thing. They tell us we should love this transformation - forty years on. Back then they denied it was even happening.

And so, yet again we are subjected to our mainstream politicians pretending to discuss immigration, putting in place all the sub-clauses - the denial of racism, the great benefits to the economy etc, like a drinking game, where if they miss one they'll have to down two fingers of brandy, before even uttering a word on the issue itself, usually ending with the self-justicatory declamation that if they don't talk about it, then others will, and we all know who they are, don't we?

Personally, I think Enoch Powell expressed the feelings (note: feelings) of a great many people. Sitting on a train or bus in your own city surrounded by foreign people speaking foreign languages is an alienating experience. I also think that ten years ago the people of this country of all backgrounds were finally finding some common ground, and that the mass immigration since then has reopened old wounds. As someone once said, about something else, 'you can't make soup if you keep pouring in cold water', and this multicultural broth we are being spoon-fed is very thin indeed.
Posted by Trooper Thompson at 00:52