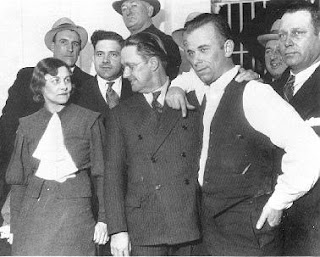 Back in the 1930s the Feds made their bones by chasing down famous outlaws such as John Dillinger, here posing at Crown Point jail, Indiana, prior to escaping with a supposedly fake gun. Unfortunately for him, during the break-out he stole the prison governor's car and drove it over state lines, which was a federal crime and allowed J Edgar Hoover's boys to come after him, and eventually shoot him down.

The wheel of history turns full circle, as we now learn the Feds are following in Dillinger's footsteps and robbing banks themselves, in this case the Liberty Dollar, a private currency bank which mints coins in precious metals and issues reserve notes backed by gold and silver. This is a wholly legal practice, and no different from a shop selling gift vouchers. But the criminals at the Federal Reserve don't like competition to their fiat money, it seems, and for whatever reason the FBI has raided and seized the Liberty Dollar's gold, silver and pretty much everything that wasn't nailed to the floor.

The decision to commit this flagrant crime seems to have been motivated by the Liberty Dollar's issuance of coins with Ron Paul's image on it. Ron Paul is well-known for his desire to close down the unconstitutional Federal Reserve (see Dr Paul versus Fed Chairman Bernanke here).

The US authorities' disregard for the rule of law, as evidenced in this raid, poses a threat out of all proportion to that posed by amateur outlaws like Dillinger. Let's hope there is still some common sense in the legal system and the Feds will be held to account.
Posted by Trooper Thompson at 13:48