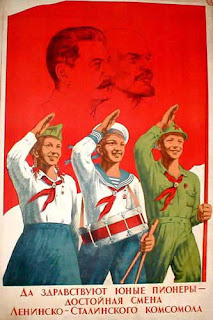 Not for nothing are the policies of this Government reminiscent of the Soviet Union, or the barren wasteland of Orwell's Airstrip One. So, I greet it's announcements of the latest education plans with the same enthusiasm as I would greet news that the chocolate ration is to be increased, or the tractor production figures have exceeded expectations.

"The 170-page report covers every aspect of children's lives from obesity to how they learn to read. With several main points already released to the press, including the extension of free nursery care to two-year-olds and an overhaul of the national curriculum, schools are bracing themselves for a wave of reforms."

Call me an old cynic, but without reading this document I know that it is a fatuous, useless piece of shit, written by wankers and cunts, who think they're experts, but in fact know less than what an illiterate farmer's wife from the Middle Ages forgot on her way to the barn.

These 'educationalists' took over fifty years to begrudgingly admit that their 'whole word' reading policy had been proven to fail. Virtually any parent is better able to teach their child to read than the teaching profession's finest young pioneer. State-controlled schools are the problem. As Bastiat wrote:

"All monopolies are detestable, but the worst of all is the monopoly of education."
Posted by Trooper Thompson at 13:08