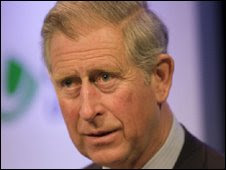 I'm not a big fan of the royals, being somewhat monarcho-sceptic, but credit where credit's due: Prince Charles was bang on the money in his comments against genetically-modified 'food' and the companies that push it.
Many will criticise him, because it's him that said it, the classic ad hominem. 'How dare Charles involve himself in such weighty matters? He should stick to polo' etc. Bollocks. If the man speaks the truth, judge him by that, not who he is.

Then there are others who wish to push the GM agenda, either their paid-for shills, or the ignorant. Genetic modification is inherently dangerous, and the evidence is legion. Some of it is freely available in the documentary below. It cannot be contained, therefore GM crops spread contamination widely. No farmer or land-owner has the right to contaminate other people's land. The company leading the GM movement is one of the most demonstrably evil corporations in the world - Monsanto, the ultimate monopoly capitalist nightmare, which literally wants to control every seed planted in the world.

So well done Charles, for speaking the truth, and fuck all those that attack you for doing so.
Posted by Trooper Thompson at 19:21

Great post! I agree 100%. I've been arguing with people on Butterflies & Wheels about how silly they are being. I KNEW I had seen something about Monsanto somwhere...and it was here. Really REALLY scary. I found out they own like 90% of this industry. I can't believe people are so dumb as to just happily allow that company to run this whole incredible industry.

Cool! So there's at least three of us - you, me and Charlie.

You should definitely see that movie down below, if you haven't already. It's the corporation from hell.

Charles didn't hammer home that GM is for Monsanto to take ownership of everything.

No. but at least he raised the issue. Every other public figure seems to be working to overturn the EU moratorium on GM food and bovine growth hormone.