Internet freedom: prepare for the Counter-Revolution 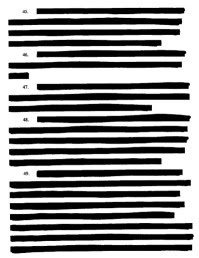 The freedom of the internet is something we cannot afford to take for granted. The information revolution it has brought about has wreaked havoc on the mainstream media and those that control it, and freedom-lovers must be braced for the counter-revolution which is gathering pace.

Of many straws in the wind, we have Stanford University law professor Lawrence Lessig warning that:

'There’s going to be an i-9/11 event. Which doesn't necessarily mean an Al Qaeda attack, it means an event where the instability or the insecurity of the internet becomes manifest during a malicious event which then inspires the government into a response....

... I was having dinner with ('Anti-terrorism czar') Richard Clarke and I asked him if there is an equivalent, is there an i-Patriot Act just sitting waiting for some substantial event as an excuse to radically change the way the internet works. He said "of course there is".'

One thing's for sure: the clampdown on internet freedom will not feature very highly in the mainstream media - it's their only hope of keeping an audience for their dumbed-down, dishonest bullshit.
Posted by Trooper Thompson at 23:40

We managed without it until ten years ago, when we used to read books and zines and go to the library or record/video shop. (and have local post offices and banks)rant rave

That Quigley stuff is interesting

over-rated? I'm sure, like me, you have searched the record shops of London for a rare tune and come up empty, only to find it on the internet.

Regarding the Quigley post, I included a link to the man's famous book - very hard to track down in the flesh for any price, now available free via the internet.

The internet is an incredible resource for individuals, that beats the hell out of any local library, important though such places are.

If the NWO kills internet freedom, there will still be an internet, but the stuff that's worth reading will be gone, and all that will be left is the mindless pap, the mainstream bollocks and pornography.

I'm happy to lose the mobile phones and the iPods, but the internet holds the possibility of man's advancement. It has democratised the media, and carries forward that old punk ethos to Do It Yourself.

Even with regard to the points you make about local services dying off, the internet can be a tool for organisation at the local level as well as the national and international level. It's too early to say where this can lead, but we have a freedom now to share information and communicate and it terrifies the vested interests, the same way as translating the Bible into English terrified the church.

I work for the msm and probably one of the most powerful. i get an insight into the control issues. namely where they are losing their product to people thieving it. that's proving difficult to track down and influence change/ but in the last few weeks they have made serious headway. and certainly when it comes to piracy, seeing what they are doing from the inside leaves me convinced they will get there in the end. but it is not through censorship type stuff. what i do know is the internet will be impossible to censor. ever. what they can do is monitor your usage of it at work and make you as employee feel pressure. which they do.

re: censorship and corporate control.

It's not one thing or the other, the two things are coming along together. Censorship is happening, through sites being blocked to access. The corporate attempts to deploy copyright laws are also gaining strength. What is most likely is, that the corporations will move the internet from a common law type system, where everything is permitted unless specifically banned, to a napoleonic system, where sites have to be registered. All they have to do is lean on the internet service providers, and there are lots of rumblings in this area. If they can, for instance, make youtube legally responsible for everything on their site, they win. At the moment, youtube say it's not their responsibility. Previously, the corporations decided to go after individuals who had downloaded music and films, hoping that a few exemplary fines on these people would change the behaviour of the rest, but the real prize is to pin the blame on the ISPs, or even better, change the structure of how people pay for the internet. If the deal is that all the corporate mainstream shit is free (after paying whatever subscription), and the rest is relegated to a backwater, that you have to pay extra for, then that would have a big effect.

Anyway, Georgia's trying to start the next world war, so I'll leave this for now!