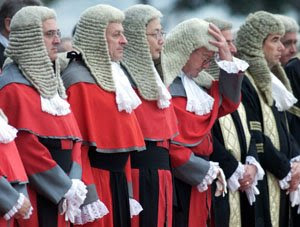 Yet again, our so-called justice system fails, and the judges put their bewigged heads together and blame the jury, who, according to so-called Justice Beaston, couldn't have kept their eye on the ball during the lengthy trial of Kevin O'Dowd for rape, threatening to kill, poisoning, false imprisonment and sexual assault - 42 days interspersed with numerous adjournments, many of which due to the defendent's claimed "ill health".

Judges, you fucked up. Don't try to push the blame on to the jury. They did their job, no doubt at great expense to themselves. Judges, you and the rest of your legal parasite cohort are the major barrier to justice in this country.

Not only do you look ridiculous, you are contemptible.

I don't have time for juries or judges in rape trials. Juries come stacked with preconceptions and forgiving natures to rapists assuming he was led on in some way no matter what. And the judges here failed utterly to step in and get a grip. This doesn't surprise me. It does sicken me though. They prevent terrorism legislation being passed in the name of terrorists freedoms and are happy to see terrorists walk free too. Fuck the lot.

You'll never escape the inherent difficulties with certain rape trials, and you can't put the onus on the man to prove his innocence. That's just the way it is. All I can suggest is to allow people to arm themselves in their own defence. This would turn the tables, as women are generally physically weaker. Rape is a terrible crime, and nothing new, of course. I've been reading about the rape of Lucretia, which led very directly to the end of monarchy in Rome and the foundation of the Republic.

...but you shouldn't blame the jury, they did nothing wrong in this case.