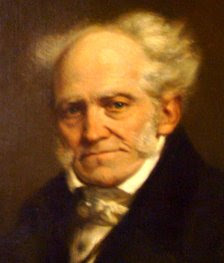 "In talking of philosophy, I admitted that my system upheld the Quietists, and commended them. Shortly afterwards the conversation turned upon Hegel, and I maintained that his writings were mostly nonsense; or, at any rate, that there were many passages in them where the author wrote the words, and it was left to the reader to find a meaning for them. My opponent did not attempt to refute this assertion ad rem, but contented himself by advancing the argumentum ad hominem and telling me that I had just been praising the Quietists, and that they had written a good deal of nonsense too.

This I admitted; but, by way of correcting him, I said that I had praised the Quietists, not as philosophers and writers, that is to say, for their achievements in the sphere of theory, but only as men, and for their conduct in mere matters of practice; and that in Hegel's case we were talking of theories. In this way I parried the attack."

Arthur Schopenhauer - from 'The Art of Being Right'

Posted by Trooper Thompson at 01:18

Great stuff, Trooper - pish to Hegel. May he rotate on spikes in his grave.

Thank you, pish indeed and may we defeat his spiritual progeny.