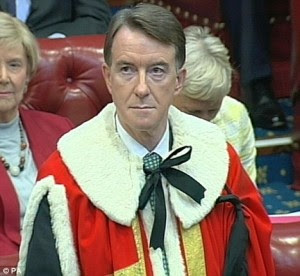 Peter Mandelson, the crooked kingpin of the collapsing Labour junta, despised and hated by the people, has more than a few tricks left to play; not least the vile and tyrannical "(Destroy freedom and the) Digital Economy Bill". As with so many of the laws from this detestable Labour reich, it is an Enabling Act, the legislative equivalent of a blank cheque signed by the craven, cowardly half-wits of Parliament with the details filled in later by the government - in the form of Baron Peter of Foy (one of the many titles Mandelson wears, like the gold braid and self-awarded medals on a tin-pot dictator's uniform).

As reported in Boing Boing:

"Secretary of State Peter Mandelson is planning to introduce changes to the Digital Economy Bill now under debate in Parliament. These changes will give the Secretary of State (Mandelson -- or his successor in the next government) the power to make "secondary legislation" (legislation that is passed without debate) to amend the provisions of Copyright, Designs and Patents Act (1988).

What that means is that an unelected official would have the power to do anything without Parliamentary oversight or debate, provided it was done in the name of protecting copyright."
From the Register:

"Claims from minister Stephen Timms this morning that the Digital Economy Bill has widespread support have been thrown into question, after the Internet Service Providers Association insisted it is strongly opposed to aspects of the legislation. Mandelson's bill gives him power to change copyright laws as he sees fit, using a statutory instrument rather than a pesky old debate in Parliament. The law will force internet service providers to write to customers accused of infringing copyright on peer-to-peer networks by rights holders like the BPI. ISPs must also hand over address information if rights holders wish to take court action. Alongside this, Ofcom will begin using deep packet inspection to see what impact the dark lord's actions are having on file sharing."
Mandelson embodies everything that is vile and hateful in this Labour government. Forced out of high office twice due to corruption scandals, now he's back, as an unelected 'Lord', insulated from the people's wrath by the fur-fringed fancy dress (see above) and the personal wealth he has purloined from the public purse.
Posted by Trooper Thompson at 11:39