Thorium: fuel of the future?

The Telegraph has an interesting article on the use of thorium as fuel, and it sounds too good to be true. Apparently:

A tonne of the silvery metal produces as much energy as 200 tonnes of uranium, or 3,500,000 tonnes of coal. A mere fistful would light London for a week.

Thorium eats its own hazardous waste. It can even scavenge the plutonium left by uranium reactors, acting as an eco-cleaner. "It’s the Big One," said Kirk Sorensen, a former NASA rocket engineer and now chief nuclear technologist at Teledyne Brown Engineering.

"Once you start looking more closely, it blows your mind away. You can run civilisation on thorium for hundreds of thousands of years, and it’s essentially free. You don’t have to deal with uranium cartels," he said.

Thorium is so common that miners treat it as a nuisance, a radioactive by-product if they try to dig up rare earth metals. The US and Australia are full of the stuff. So are the granite rocks of Cornwall. You do not need much: all is potentially usable as fuel, compared to just 0.7pc for uranium.

Reading further, we learn how the usual problem of vested interests has held back progress. Let us hope that, for once, the interests of humanity can come out on top. 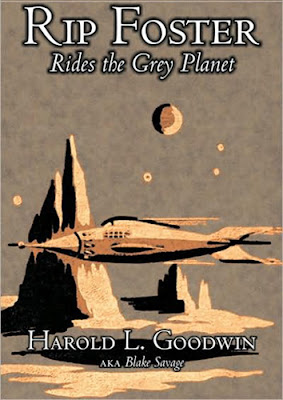 Update: Apparently this is old news, at least to sci-fi buffs (see above). Well, hell, we're living in the 21st Century, after all. (Hat tip to the Sniper).

Posted by Trooper Thompson at 10:54

Rip Foster Rides the Grey Planet. It's all there

Of course in those days I was only a Snipling, or should that be a Snipper?

Either is good. Unfortunately, it seems we're still dealing with the same enemy - the dastardly Consops.

Not just them. Sensible greens will welcome the idea but some of the madder and more vocal ones will hate it. They won't be grateful for a long term, proliferation proof, clean and cheap power supply that can even help clean up current nuclear waste and decommissioned warheads. They don't want answers, they want austerity.

Another possible opponent may be, ironically, the nuclear power industry itself. I've been watching some long videos about thorium power on YouTube lately (very interesting stuff - if you've not seen 'em search YouTube for 'LFTR'), at least one of which mentioned that current reactors are often built at a loss and the money is made on the fuel supply contract. There's more to be made on mining, refining and fabricating fuel rods into weird and wonderful shapes, which won't be the case with thorium power. Not fitting the business model means it won't have many fans there.

It might even be Big Oil shitting bricks about running out or throwing their lot in with the warmers and looking for a new energy source. Frankly I don't care as long as someone develops it and brings the thing to market.

Well, this seems to be the recurring problem with the development of new technology: vested interests of an oligopoly.

You're right about the far fringe of the environmentalists, who believe earth would be better off without us nasty humans. This also ties in with the views of some dangerously rich people, who would love to get rid of the majority of us 'useless eaters'.