Barry, could you pass the salt please?

Big news, huh? Third-rate hack actor and US President Barry Obama has announced the death of super-villain Osama Bin Laden, and he's been buried at sea! I mean, that's what you do, isn't it, when you capture the most sought-after man on the planet; dump his body over the side of a boat before anyone's got a look at it.
As far as I was aware Bin Laden was dead back in 2001, and I don't trust a word Barry says. Stranger things have happened, no doubt, so there's an outside possibility that this may be true, but there's also the chance it's a stinking lie. Time will tell.

UPDATE: US forces may live to regret 'burying' Bin Laden at sea, if reports coming in from Somalia are to be believed. Apparently Bin Laden is alive, having emerged from the waves, claiming he had only been stunned when a bullet grazed his skull, and that the cold water had revived him, before a passing clam swallowed him up and deposited him on the shore of Africa. Vatican sources have dismissed suggestions that Bin Laden's escape could be a miracle attributable to the late Pope John Paul II. 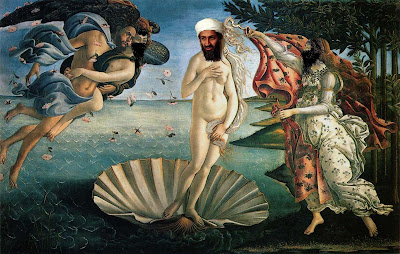 UPDATE: An interesting take over at Veterans Today
Posted by Trooper Thompson at 13:14

Botticelli will be spinning in his grave for that.

Would you prefer Ursula Andress from Dr No?