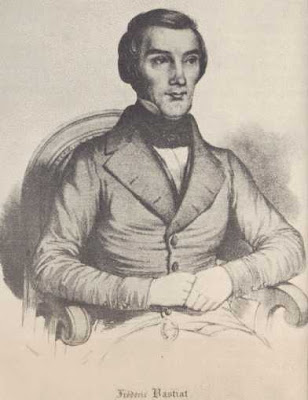 Justice and fraternity, in Journal des Économistes, 15 June 1848, page 313
"[The socialists declare] that the State owes subsistence, well-being, and education to all its citizens; that it should be generous, charitable, involved in everything, devoted to everybody; ...that it should intervene directly to relieve all suffering, satisfy and anticipate all wants, furnish capital to all enterprises, enlightenment to all minds, balm for all wounds, asylums for all the unfortunate, and even aid to the point of shedding French blood, for all oppressed people on the face of the earth.

Who would not like to see all these benefits flow forth upon the world from the law, as from an inexhaustible source? ... But is it possible? ... Whence does [the State] draw those resources that it is urged to dispense by way of benefits to individuals? Is it not from the individuals themselves? How, then, can these resources be increased by passing through the hands of a parasitic and voracious intermediary?

...Finally...we shall see the entire people transformed into petitioners. Landed property, agriculture, industry, commerce, shipping, industrial companies, all will bestir themselves to claim favors from the State. The public treasury will be literally pillaged. Everyone will have good reasons to prove that legal fraternity should be interpreted in this sense: "Let me have the benefits, and let others pay the costs." Everyone's effort will be directed toward snatching a scrap of fraternal privilege from the legislature. The suffering classes, although having the greatest claim, will not always have the greatest success."
Found at Wikiquote Frédéric Bastiat
Posted by Trooper Thompson at 23:40

I confess outside of the broken window fallacy, I have not read any Bastiat, sounds like I should.

He's definitely worth reading. Mises Institute do a one-volume collected works and Liberty Fund are in the process of publishing a five-volume collection, of which only the first is out yet, but you can of course read most of his stuff for free.