In praise of Sir Walter Ralegh

Without any doubt in my mind, Sir Walter Ralegh was one of the greatest Englishmen who ever walked. I was recently furious to learn of the disgraceful conduct of his ludicrous trial for treason. Let it be remembered that the official version of events are often stinking lies. Sir Walter; working for the Spanish king? Even to write it, I feel like spitting, but I won't, as it's my carpet.
The reason for wishing to express my love and respect to Sir Walter is the pipe I have just enjoyed. My dear grandfather used to smoke a pipe, and his brand was Gold Block. Not too long ago, I inherited a couple of his pipes and, in the tobacconists of London town I sought out a pouch of his chosen poison. Now, there is much to learn, I am sure, of the art of pipe smoking, but when the planets align, and a glass of whiskey is to hand, it's a damned fine way to end the day, and for that I pay homage to my dear grandfather and to the great Sir Walter Ralegh, who brought back that naughty herb to this island.

P.S. Fellow blogger Mark Wadsworth has foolishly decided to dispute my spelling of Sir Walter's surname. As the signature below shows, 'Ralegh' is how he wrote it. So there! 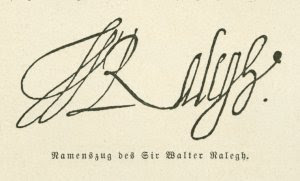 Posted by Trooper Thompson at 01:13

I'd ask "What are you smoking?" but you just answered that.

I really hope you are not questioning the spelling of Ralegh's name, because I'm going to have to slap you down if that is the case. Look it up, buddy.

If, instead you are daring to question my characterisation of Ralegh as one of England's finest sons, there'll be even more trouble.

Everybody else spells it "Raleigh", is this some bizarre insider spelling like "Magick"?