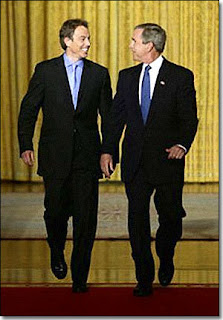 Reports in the spanish newspaper El Pais (and picked up here and here) reveal the sickening truth that the invasion of Iraq and the killing of hundreds of thousands of Iraqis, not to mention thousands of US and hundreds of British troops could all have been avoided.

Saddam, seeing the writing on the wall, offered to go into exile for $1 billion. A lot of money, but only a minute fraction of the cost of this war in money, now currently running at $1 trillion, spent to turn Iraq into a wasteland, and God knows what to rebuild it. The cost of human life is immeasurable.

It could not be clearer that this terrible war was nothing to do with “weapons of mass destruction” or Saddam's atrocious human rights record. Instead it was a callous, calculated act of genocide against the Iraqi people and the guilty must be brought to justice. Bush, Blair, laugh now motherfuckers - the lake of fire awaits.

Posted by Trooper Thompson at 20:16

If thats true that is truly dreadful. I still honestly believe that Blair thought of this as liberal interventionism. The only thing i would say that is if the people of iraq has risen up to overthrow Saddam it would always have ended bloodily. Im not excusing it Trooper but i think calculated act of genocide is a bit harsh? I dont (cant) believe Blair would laugh at this. Bush im not so sure about. Fuck i dunno anymore. Im the idiot that sees our troops go off to war has to get behind them no matter what and lives in hope that the people will get what they deserve in the end. Im thinking Malali Joya here - albeit that is Afghanistan, they want to be free of tyrants and murderers.

The destruction of Iraq began long before the invasion. The sanctions that the British and American governments imposed were responsible for perhaps one million deaths.

The controversy dates from 1995, when researchers with a Food and Agricultural Organization (FAO) study in Iraq wrote to The Lancet, the journal of the British Medical Society, asserting that sanctions were responsible for the deaths of 567,000 Iraqi children. The New York Times picked up the story and declared "Iraq Sanctions Kill Children." CBS followed up with a segment on 60 Minutes that repeated the numbers and depicted sanctions as a murderous assault on children. This was the program in which UN ambassador (and later Secretary of State) Madeleine Albright, when asked about these numbers, coldly stated, "The price is worth it."

So the genocide I believe that has been committed goes back further than the two men in the picture. Over ten years ago when I was in the Middle East I would be asked "why do you (the British) hate the Iraqis?" and I had to explain that the people of my country (England) didn't hate them, but had little control over what our rulers did - something that they could readily understand.

The wishes of the people of Afghanistan and Iraq had nothing to do with the decisions to attack their countries, any more than it did when the USA was selling Saddam chemical and biological weapons or when the US was supporting the Pakistani military to set up the Taliban. You may also note that the human rights record of the Iranian government, likewise is not the reason that Iran may soon be attacked, but the nuclear programme. As to what Mr Blair believed, he has shared in the killing of hundreds of thousands of people, and now Iraq lies in ruins and thousands are struck down by cholera, and he cannot escape his culpability in these crimes, and my contempt for him is almost without end.