Constitutional reform: how it should look 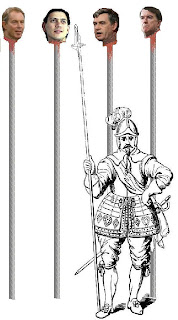 According to Peter Riddell in the Times, 'Gordon Brown's biggest policy innovation has been to revive the debate on constitutional reform.' This debate apparently consists of the bile-fermenting concept of an official 'British statement of values', to be decided upon by a hand-picked 'citizens' conference', and furthermore a 'Bill of Rights and Responsibilities,' an idea so hideously fascist. Mussolino would blush.

Firstly, a little context: This is the man who heads a government that is, as we speak, preparing to hand over a great deal of the sovereignty of this country to a foreign power, whilst betraying its manifesto commitment to let the people decide the issue in a referendum. A man and a government with utter contempt for this country and its people, for democracy and their own word. A venal, lying, treacherous, cowardly, undemocratic, unconstitutional shower of shite.

Whatever 'values' means to these plague rats, I don't share them. And I know my rights, I don't need anyone to tell me those. As for responsibilities, one stands out above all else: to rid our country of this foul and wretched Government.

Posted by Trooper Thompson at 08:23